The Season Kicks Off 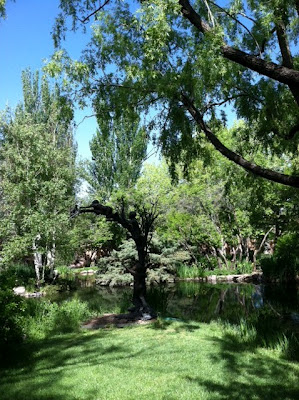 At the Matteucci Sculpture Garden today

Cottonwoods and aspens are in potent young-green bloom everywhere in Santa Fe, the ponds are full in the Nedra Matteucci Galleries sculpture garden, and pink peonies are popping up on the patio at Restaurant Martín. So begins high season. Behind the scenes there’s action, too: Four Seasons Hotels takes over Tesuque’s posh Encantado Resort on June 1, and the beguiling La Posada de Santa Fe with its six acres of gardens is no longer a Rock Resorts property but remains owned by a Swiss bank.

I just went to the Michael McGarrity cocktail party for Hard Country, his sweeping historical Western which is a prequel to his captivating Kevin Kerney mystery series. The party was a benefit for the N. Scott Momaday Creative Writing Scholarship Fund at the IAIA. Looking handsome in his distinguished elder way, Momaday was flanked by his gorgeous daughters. Everyone wanted a minute with Momaday, and he graciously obliged. He’s been living in Florida but intends to return to Santa Fe. While in town this week, he’s recording some of his written works in his famous basso voice. McGarrity’s writer cronies turned out too, including novelist David Morrell, who wrote the Rambo books and lots of other thrillers; novelist Jann Arrington Wolcott, who has a thriller slated for release in the fall; and poet Luci Tapahonso. Native Peoples publisher Stephen Phillips was there, explaining that Native Peoples is the official Indian Market Magazine this year, and so was philanthropist Charmay Allred, who produced the packed get-together. McGarrity will be appearing at the Michael McCormick Gallery for another gala gathering on Saturday, May 19 at 1 PM.

McLarry Modern is now representing Sharron Evans, who does those fabulous graphic-modernist horse paintings; Waxlander Gallery has some splashy new paintings of Indians on horses by Native artist/playwright Bruce King; Legends Santa Fe has a glowing green and blue glass water jar by Robert Spooner Marcus that’s pretty much a steal at $3,000; and just across the street, Blue Rain Gallery has some of the most elegant tall glass vessels imaginable by Dante Marioni. Oh yes, high season is here.