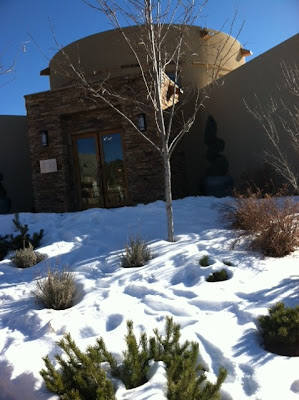 The Spa at the Four Seasons
Rancho Encanto Santa Fe.

Winter in Santa Fe is all about staying warm despite the snow and ice glistening on adobe walls, the temperatures dipping down to six and seven degrees. Souper Bowl XIX, where chefs compete for best soup awards, is gearing up for January 26. The usual suspects should get ready this year for some steep competition from two awesome new chefs in town: executive chef Andrew Cooper and sous chef Keith Smutny at Four Seasons Resort Rancho Encantado (try their chile rellenos).

I’ve loved Rancho Encantado since I first came to Santa Fe to work on the Filmmaking in New Mexico special issue for The Hollywood Reporter as a cub reporter years ago. The dude ranch’s founder and then owner Betty Egan reminded us of Barbara Stanwyck in “The Big Valley”–– a commanding cowgirl in jeans and Western boots who was just as at ease on horseback as at an entertainment business reception. She encouraged me to move here. I bought my horse Ryo from a wrangler at Rancho Encantado, and boarded him at Rancho Encantado for years, embarking on exhilarating rides into the Sangre de Cristos. He was a tough little Mustang, and made me braver. And then there were the tranquil hours in the barn spent grooming him as the ravens
cawed outside.

Yesterday I was back at Rancho Encantado, which is now the posh Four Seasons Resort Rancho Encantado. It’s as gorgeous as ever –– 57 acres of pristine mountain foothills dotted with piñon pine and juniper trees, casitas sprinkled between the trees. Even though the architecture is now more hard-edged contemporary than Western dude ranch, the ravens still fly through and the resort still exudes serenity, especially in the fabulous spa, where I had a Sacred Stone massage that sent me over the moon –– grounding, soothing, and healing. In the locker room afterwards, I chatted with a local who has a spa membership. “I come here almost every day. I work out in the fitness room, take a sauna or steam, have some apricots and pecans in the warming room, and meet the nicest people. It’s a special place,” she said.
So true.