Of Apples and Aspens 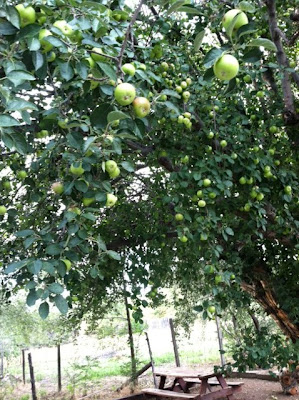 An apple tree in Tesuque

Tesuque’s apple trees are full of fruit, the aspens are turning yellow up at the Santa Fe Ski Basin, and by month’s end there will probably be snow flurries. October brings autumn to Santa Fe. It’s time to stock up on firewood, hike at Aspen Vista (I was there on Sunday, along with everyone else and their dogs), and enjoy dinners out on still-warm evenings when a sweater or hoodie suffices. So far, October is living up to its reputation as Santa Fe’s best month. The harvest is in full bounty, with nights dipping down into the forties and days in the seventies.

Last night I went out to Taberna, the new in restaurant just opened by James Caruso, chef-owner of the popular La Boca. Both Taberna and La Boca are Spanish-style tapas taverns, with similar menus. Despite being located in a tucked-away downtown courtyard invisible from the street (you can enter from Lincoln or Marcy), Taberna was packed last night. Santa Feans can be counted on to turn out for gourmet repasts like this at reasonable prices. Our favorite dishes? The grilled artichokes, salmon wrapped around goat cheese, roasted eggplant, and Spanish sausage.

Meanwhile, I’m gearing up for the Tony Hillerman Writers Conference, taking place November 8-10 at the Hotel Santa Fe. I helped the develop the “Writing with the Stars” workshop where best-selling thriller novelist David Morrell (best known for the Rambo books) and agent Liz Trupin Pulli will take to the stage in front of the crowd to deliver flash critiques of selected works submitted by conference attendees. If Morrell is in as high form as he was last year, it’ll be a savvy and witty affair!