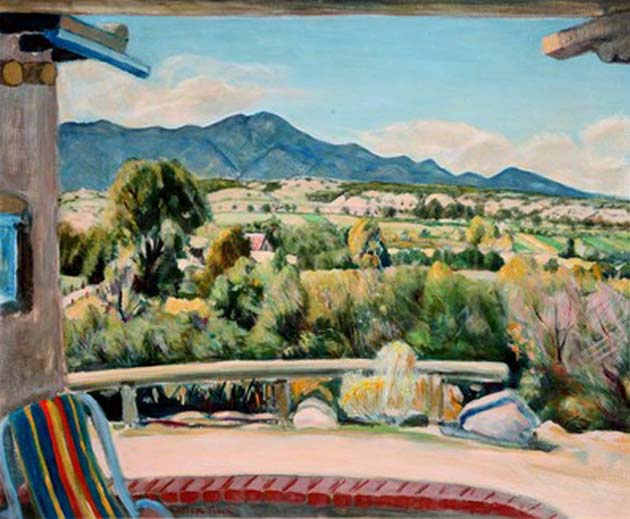 The Early History of Canyon Road

Read about this once sleepy rural area

The unique mingling of fine art galleries with gracious adobe homes on winding, shaded streets is the essence of Canyon Road’s charm.

Although it is just blocks from Santa Fe’s busy plaza, Canyon Road’s special quality arises from its history as a rural neighborhood of small farms scattered along an old Indian trail.

The oldest adobe houses on Canyon Road date at least to the 1750s, built as modest, two or three-room dwellings by early Spanish settlers. Each house was the center of a family farm that raised corn and wheat and vegetables on the fertile patches of land bordering the Santa Fe River.

In those days it would not have been unusual to see a small flock of sheep being driven up the road on the way to green, mountain pastures deeper in the canyon.

Farming in this high desert climate always was a challenge. Shortly after founding Santa Fe in 1610, the Spanish built an irrigation canal above the river, parallel to Canyon Road.

Still in use, this Acequia Madre, or “mother ditch,” brought precious water out of the Sangre de Cristo Mountains to sustain crops, livestock, and people in the Canyon Road neighborhood.

Present day visitors should take a stroll down shaded Acequia Madre Street (just one block south of Canyon Road) to enjoy the ancient stone-lined canal and the beautiful adobe homes, which have depended on it for centuries.

From the earliest days of Spanish settlement, enterprising Santa Feans walked their burros up the old “Road of the Canyon” to gather firewood in the mountain forests.

Late in the day, residents would see the burros lumbering back down Canyon Road, laden with impossibly large bundles of split pinon wood that were destined for delivery to customers in town or for sale in Santa Fe’s Burro Alley.

After the US Army arrived in Santa Fe in 1846, soldiers built a sawmill in the canyon and carted the lumber down Canyon Road to build Ft. Marcy, northeast of the plaza.

The new fort marked the United States’ acquisition of New Mexico (and the rest of the southwest and California) in the Mexican-American War. As the capital of New Mexico Territory, Santa Fe would experience a new, American government, just as the old Santa Fe Trail would bring an ever larger influx of Anglo-American people and goods into this remote Spanish town.

Despite the changes going on around it, the Canyon Road neighborhood in the territorial era remained much as it had been for the previous century: a quiet farming community of Spanish families on the outskirts of Santa Fe. And so it would be until the birth of Santa Fe’s famous art colony in the early twentieth century.