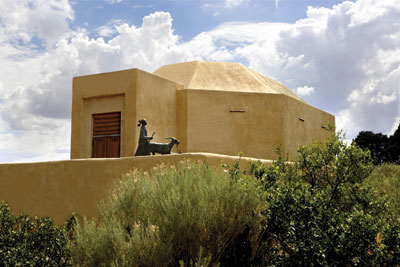 The Wheelwright Museum of the American Indian

by Jonathan Batkin, Director of Wheelwright Museum of the American Indian Wheelwright Museum of the American Indian, Photo by Addison Doty

Born while the Navajo people were held as prisoners of war by the United States government, and witness to decades of relentless attempts by the government and missionaries to assimilate the Navajo, Klah feared that his and other practitioners’ ritual knowledge would be lost.

Miss Wheelwright was interested in the world’s religions, and in her Klah recognized a sympathetic outsider who would help ensure that Navajo ritual traditions would survive.

Wheelwright documented the chanted and spoken word in Navajo religion, and she recorded Klah’s and other singers’ narrations of the Navajo creation story and other epics that underlie Navajo belief and practice.

Franc Newcomb, who introduced Wheelwright and Klah in about 1921, recorded Navajo drypaintings, or sandpaintings, in tempera on artist board. Klah was also a weaver, and he rendered sandpaintings from the Nightway and other ceremonies in tapestry weave.

By the 1930s, the resulting sound recordings, paintings, textiles, and manuscripts required a repository, and in 1936, Klah blessed the museum site, which was donated by Amelia Elizabeth White.

Klah passed away before the building was completed, and in November 1937, the singer Big Man conducted a house blessing attended by many of Klah’s relatives, who came to Santa Fe by bus from the area near present-day Newcomb, north of Gallup.

For thirty years the museum, then named the Museum of Navajo Ceremonial Art, presented changing exhibitions on different chantways, illustrated with large oil paintings that were created by Anglo artists based on renderings of sandpaintings by Newcomb and others. By the late 1960s, the museum began to sense growing disapproval by the Navajo, who objected to the dissemination to the public of Navajo beliefs and practices. In 1977, the museum became the first museum in North America to repatriate sensitive materials to a Native people when it gave several medicine bundles and all of the paintings it had used for exhibitions to Navajo Community College (now Diné College) at Tsaile, Arizona.

Components of the bundles have been put back into use, and the paintings are still utilized as teaching aids at the college.

Anticipating these changes to its mission, the museum began around 1975 to utilize its only gallery for changing exhibitions of contemporary and traditional Native American arts, especially of the Southwest.

One-person exhibitions became the mainstay of this program, and among the first artists to be celebrated were T. C. Cannon and Fritz Scholder.

In addition, the museum has organized numerous exhibitions exploring achievements in basketry, pottery, weaving, jewelry, beadworking, embroidery, and other arts among the Navajo, Paiute, Pueblos and other peoples all across North America.

Since 1995, the Wheelwright has published more original research on these arts than any other museum in the country.

In recognition of its anniversary the museum’s annual exhibition will be A Certain Fire: Mary Wheelwright Collects the Southwest. Here the museum will explore Wheelwright’s many interests, especially weaving and needlework. While these arts did not fit the mission of her own museum, she acquired and donated many superb pieces to the Indian Arts Fund, the Spanish Colonial Arts Society and the New Mexico Historical Society.

Those objects are now owned by the School for Advanced Research, the Museum of Spanish Colonial Art and the Museum of International Folk Art and will be on loan to the Wheelwright Museum for the exhibition. A Certain Fire will examine Wheelwright’s passion for the Southwest starting with a trip in 1914, and will explore her friendship with Hastiin Klah and the origins of the museum.

Many objects from the Wheelwright Museum’s own collection will also be in the exhibition, including an important collection of Navajo baskets that Wheelwright acquired almost immediately after the building was dedicated.

Over the past twenty years, the museum has conducted three successful capital campaigns and one endowment campaign.

It is now in the midst of its biggest campaign ever, which will result in an expansion that will provide the museum its first permanent exhibition space and will give Santa Fe an exciting new destination.

In addition to the gallery, a classroom, and other public spaces, the museum will expand its gardens, will create dedicated parking, and will improve pedestrian access to its buildings.

The museum has raised nearly $2.5 million of its $3 million goal, and hopes to break ground before 2013.

In spite of the many changes since 1937, the museum maintains important collections and archives relating to the Navajo and other peoples of the Southwest, and it is acknowledged internationally as an innovator in the study and presentation of Native arts. Keep your eye on the Wheelwright Museum, because the best is yet to come.