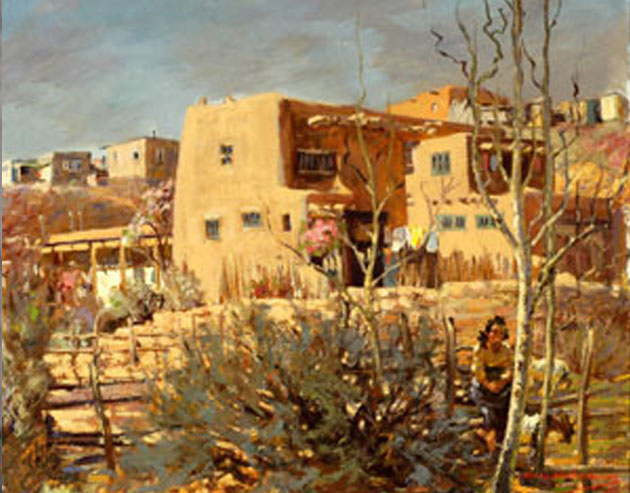 The origins of Santa Fe style

Learn about the history of the West’s most picturesque city

“All the buildings are brown…but it’s so beautiful!” a first-time visitor to Santa Fe recently exclaimed. Although this response is typical for today’s first- timers, early visitors seldom had such a favorable first impression. More often they found the little village of simple, mud structures and muddy streets to be a crude and unkempt backwater.

Attitudes began to change in the late nineteenth century when anthropologists, artists and a few tourists began exploring the Southwest. Rather, this new breed of visitors was fascinated by the cultures of the local Native American and Hispanic communities and their indigenous styles of architecture, crafts, and art.

The Birth of Santa Fe Style

By 1910, the Santa Fe city fathers realized that the centuries-old tradition of Pueblo and Spanish architecture was no longer a liability, but an asset that would help attract tourism. They made a concerted effort to encourage new construction based on local building traditions rather than the Victorian styles that had become prevalent after New Mexico became a U.S. territory. This reborn indigenous architecture and design became collectively known as Spanish/Pueblo Revival. Santa Fe Style was born.

The synergy of Spanish and Pueblo traditions

Artists and architects immediately took up the cause, developing and enriching the style through the 1910s, 20s, and 30s. From the Spanish tradition, designers borrowed beautifully carved and painted woodwork—especially the decorated vigas or ceiling beams—as well as the long portales or verandas that provided essential shade during Southwestern summers.

From the Pueblo tradition they borrowed the characteristic stepped building shapes that resulted from rooms being added as necessary over the centuries. From both traditions, they employed adobe (mud and straw) bricks covered in mud or stucco plaster which resulted in thick walls, small windows, and beautifully soft, rounded shapes.

The first fully-realized example of the Spanish/Pueblo Revival style is the Museum of Fine Arts, built on the Plaza in 1917 by the firm of Rapp & Rapp. Carlos Vierra, the first professional artist to take up permanent residence in Santa Fe, made careful study of early structures and built the first Revival style residence in 1918. William P. Henderson, a nationally known painter, also designed furniture and buildings in the style as did his artist neighbor, Frank Applegate, who championed the restoration of historic Spanish churches. From the 1920s on, nearly all artists, writers, architects, and other style leaders built their Santa Fe homes in the Spanish/Pueblo Revival style. True to their interest in indigenous arts, most Revival style homeowners furnished their dwellings with Native pottery, weaving, and other crafts, and with Hispanic furniture, tinwork and religious painting. Some builders, such as Frank Applegate, went so far as to incorporate antique woodwork from historic Spanish buildings that were too dilapidated to restore. Of course, nearly everyone adorned their homes with paintings done by their friends and neighbors who made up the thriving Santa Fe art colony.

Even as the Santa Fe Style took shape, it began to expand and change. In the 1930s, architect John Gaw Meem—one of the early champions of the Spanish/Pueblo Revival and its most gifted practitioner—developed the Territorial Revival Style. Meem based it on adobe structures built in northern New Mexico in the mid- to late-1800s, when Americans were bringing Neo-classical and Victorian design ideas to bear on local building traditions. The symmetrical forms, larger windows, and classical woodwork of Territorial homes made an appropriate setting for high-style Anglo furnishings as well as Native American and Spanish craft items.

Other designers continued to reshape and adapt the Santa Fe Style to accommodate new design influences. Artist and architect, William Lumpkins, brought the study of pre-historic Puebloan structures to his work. He also became a leader in the passive-solar movement; a concept perfectly adapted to New Mexico’s sunny skies, and to the excellent thermal properties of adobe which stays cool in summer and warm in winter. The idea was taken a step further in the notorious “Earthships” or partially subterranean adobe houses commonly associated with the Taos communes of the 1960s and 70s. In the post-war era, Meem went on to develop frankly modernist homes of adobe, steel and glass. Even Frank Lloyd Wright applied his unique imagination to an adobe style home in Santa Fe.

Given the various paths taken by designers of Santa Fe Style, we no longer can say that the Spanish/Pueblo Revival defines the style. Indeed, many designers and homeowners now find strict adherence to the vigas-pots-and-blankets look to be a self-parody. That was the original inspiration, but we’ve come a long way since then.

It would be easy just to say, “You know Santa Fe Style when you see it.” But here at canyonroadarts.com, we’re willing to take the plunge and attempt to define what makes Santa Fe Style today. Rather than point to specific materials or construction techniques or decorative details, we think the Style is really a set of values about design that are inspired by the unique qualities of this place. It can encompass enormous variety and yet it has a defining spirit which is unmistakably Santa Fe.

We believe that the celebration of local cultures remains the core of Santa Fe Style. This was its origin, and it certainly has been a constant throughout its history. That’s not to say every detail of a home must be a Native artifact or Hispanic folk object. A little can go a long way. Also remember that Anglo ranchers and traders have been part of the local landscape for more than 150 years, a fact implicitly acknowledged by Meem’s Territorial Style architecture. Santa Fe can be a bit cowboy, too.

Because Santa Fe is a unique amalgam of three distinct cultures, eclecticism has always been part of the Style. What’s more, the artful mixing of design traditions need not be strictly limited to Native American, Hispanic and Anglo influence. Local designers long have mixed American and European antiques, Mission furniture, and Southeast Asian woodwork into Santa Fe Style homes with great success. Furniture and artifacts from other parts of the world that build with adobe, always seem to have an affinity with Santa Fe. In the past few decades, eclecticism has become a byword in design nationwide, but Santa Fe was there at least half a century before everyone else.

The appeal to artists

Two things drew artists to Santa Fe in the early twentieth century. One was their interest in indigenous cultures. The other was the natural beauty of the landscape and quality of light in the high desert. Orientation to the natural environment is fundamental to Santa Fe Style. This not only means orienting windows to the view. It also can mean enlivening a room by manipulating the way sunlight moves through the space. It can mean integrating a building into its surroundings with careful use of form, color and materials. It can mean passive-solar design, or harvesting rainwater, or planting xeric landscaping to preserve scarce resources. Santa Fe Style respects and incorporates the natural surroundings that made you want to have a house there in the first place.

One of the surest ways to make a building at home in the landscape is the use of natural materials. Nothing blends better with the earth than adobe—earth itself. Natural wood, flagstone, brick, ceramic tile and river rock also help give an earthy but sophisticated feel to Santa Fe Style homes. Natural materials lend themselves to any type of décor from rustic to minimalist, and they make a sympathetic backdrop for pottery, rugs and other indigenous handcrafts.

Early visitors criticized Santa Fe’s simple adobe buildings as crude and lacking in style, adornment and, therefore, civility. What was once a fault, however, has become a virtue: the lack of style has become a style of its own. In other words, simplicity is essential to the Santa Fe look. Nowhere is this more clearly revealed than in Georgia O’Keeffe’s home in Abiquiu. Thoughtful design, ample natural light and the use of natural materials can make the simplest home warm and inviting without being cluttered by unnecessary decoration. Design extravagance is the antithesis of Santa Fe Style.

For the artists and architects who first developed the Santa Fe Style, life here was a retreat from the staid social and artistic environment of the East. This embrace of informality continues to pervade Santa Fe design. In fact, all of its attributes promote a casualness that politely ignores the conventions of urban design. Simple, natural, and local add up to freedom from pretense; freedom to create your own style of living.

Considering its origins among the Santa Fe art colony, Santa Fe Style encourages—perhaps requires—the knowledgeable appreciation of art and artists. Whether indigenous craft, ethnic/tribal art, or contemporary fine art, original artworks are indispensable in a Santa Fe Style home. As a small city with a very large number of artists and galleries, Santa Fe provides abundant opportunity to learn past and present trends in the art world and, importantly, to meet the artists. Original art for every taste and budget surrounds us. Participating in Santa Fe’s artistic traditions draws us more closely into the life of this place, and enriches our homes and lives every day.

To learn more about the arts of Canyon Road, please see the Medicine Man Gallery website.