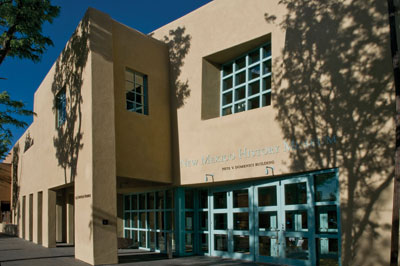 Past, present, and future together in three new facilities in downtown Santa Fe On Memorial Day Weekend, 2009, twenty years of work came to fruition with the opening of The New Mexico History Museum. In a place where history is ever present, it is somewhat surprising that this is the first museum dedicated to telling the stories of our entire state. It is the largest cultural project ever undertaken in Santa Fe.

At the core of the new facility is an exhibit combining artifacts, photographs, sound, and film in a narrative of New Mexico’s multicultural history from pre-historic times to the present. It demonstrates how interactions between our state’s natural environment and cultural landscape have forged not one, but many identities for the region and its peoples. New Mexico is much hailed for its tri-cultural heritage, but this new exhibit reveals a much more complex and fascinating history of cultural give-and-take, conflict and cooperation, and constant mixing of peoples and cultures. The result is not three distinct groups called Indians, Hispanics, and Anglos; nor is New Mexico a melting pot. It is more like a rich tapestry of cultures woven together across both geography and time.

The 96,000 square foot New Mexico History Museum also contains an expansive gallery for temporary exhibitions, an auditorium for performances and events, the Discovery Center where families can engage in hands-on, self-paced activities, and a terrace café with views of the buildings lining the Santa Fe Plaza.

Deftly tucked behind the Palace of the Governors on Lincoln Avenue, the new Museum building is a 21st century version of Spanish/Pueblo Revival architecture, at once contrasting and complementing the 400-year-old Palace. A walkway connects the two buildings, effectively incorporating the Palace into the campus of the History Museum. Palace’s exhibits will be revamped in the future to focus on the lives of its many occupants. New displays will include 17th, 18th, and 19th Century period rooms, interpretive displays, a collection of Hispanic paintings, the Palace Print Shop, and daily demonstrations by Native artisans who sell their wares on the Palace Portal. About the New Mexico History Museum

Whether you are an experienced explorer of New Mexico or a first-time visitor, the New Mexico History Museum is a must-see that offers a richer and deeper appreciation of our remarkable state.

Many arts-oriented visitors to Santa Fe will remember the old Sweeney Center at Grant and Marcy Streets, a former high school gymnasium that had hosted hundreds of cultural events since the 1970s. On its site now stands the new Santa Fe Community Convention Center, a magnificent new facility that is quickly becoming the social and cultural heart of Santa Fe.

Before construction on the new Center began in 2006, archaeologists conducted a survey of the below-ground resources on the site. They uncovered building foundations and artifacts from every period of Santa Fe’s history including an 18th Century Spanish Colonial-era residence, the Spanish and Mexican-era presidio (garrison,) and Fort Marcy, the mid-19th century American garrison. Most fascinating was the discovery of pre-historic building foundations which confirmed the long-rumored existence of an Ancestral Puebloan village on the site, occupied from about 1200 to 1450 CE.

The new Community Convention Center comprises an exhibition hall, meeting rooms, three catering kitchens, an open-air courtyard, and a 2400 square foot sales gallery featuring the work of local artists. The City also set aside $450,000 for the purchase of local artworks that are being permanently installed in the building.  Other special features of the 72,000 square foot facility include wireless high speed internet, underground parking, fireplaces in meeting rooms, and outdoor meeting areas. The Santa Fe Convention and Visitors Bureau now makes its home on the Grant Street side of the building. The Convention Center’s design is Santa Fe’s traditional Spanish/Pueblo Revival style, but its construction is pure 21st Century. Santa Fe was the first US city to sign the Architecture 2030 Challenge, a national effort to eliminate net greenhouse gas emissions in new construction by 2030, and the City is pursuing LEED (Leadership in Energy and Environmental Design) certification for the Center. Steps taken to reduce the “carbon footprint” of the building include: recycling 88% of the old building and 75% of new construction waste; rooftop gardens to reduce heating and air-conditioning; a rainwater harvesting system; extensive use of skylights; and sensors that will turn off lights in unoccupied rooms.

With its new facility, the Convention and Visitor’s Bureau hopes to attract larger conferences (up to 2000 participants) and a larger number of them. For art lovers and locals, however, the excitement lies in the return of our favorite events to the center of town. Indian Market and Spanish Market judging, Fiesta de Santa Fe, the August art and antique shows, and many other cultural traditions, old and new, now have a handsome new home. The largest redevelopment project in Santa Fe is the Santa Fe Railyard, located on the southwest edge of downtown, west of Guadalupe and Cerrillos Roads. The Railyard’s story actually began in 1880 when the Santa Fe Railway completed a spur line connecting its namesake town to the mainline. Over the years, a lively commercial neighborhood grew up around the rail terminus at the southern edge of the old Guadalupe district. With shops, warehouses, coal and lumber yards, it became a business and social center for locals, a few blocks removed from the more “cosmopolitan” commerce of the Plaza.

As railroad traffic declined in the 1960s and 70s, so did the businesses it supported, and much of the 50-acre railyard fell into disuse. In 1995, after local citizens rejected a massive private redevelopment plan proposed by the Santa Fe Railway, the City of Santa Fe bought the land from the railroad. The city approved a new plan in 2002 and groundbreaking took place in 2004. Citizen activism continued to ensure that the planning process for the Railyard included a high degree of community input and review. The result is an impressive complex of homes, private businesses, and public institutions whose social and economic contributions will extend far beyond the neighborhood to the entire city.

One of the community-based principles of the new Railyard is to honor the history of the neighborhood while helping it create a vibrant future. Unlike Santa Fe’s other historic districts where Spanish/Pueblo Revival architecture is required, designs for the Railyard embrace the gritty, industrial look of the warehouses and workshops that dotted the area. The plan also remains true to the neighborhood’s history of locally-oriented businesses, giving preference to mom-and-pop enterprises and local non-profit organizations. In fact, new or expanded facilities have opened for several much-loved Santa Fe non-profits that first moved to the Railyard when it was on the decline and rents were cheap. SITE Santa Fe, Warehouse 21 (art and performance space for teens,) El Museo Cultural, and Santa Fe Farmer’s Market are the cultural and social core of the Railyard. Commercial projects in the Railyard include new and refurbished buildings for shops, restaurants and offices; an indoor/outdoor Farmers Market space for 150 vendors; and a 407-car underground parking garage. Approximately 40 tenants already have committed to the project with stores ranging from a stone yard to art galleries. The Railyard also will have 50 new residential units including 20 live/work loft condominiums for artists and others who work at home.

The Railyard’s history as a gathering place will live again in the Railyard’s new Park and Plaza. As tradition dictates, the two-acre plaza lies at the center of the commercial development and is designed to accommodate community events and activities. The plaza’s centerpiece is a railroad water tower which represents the historical importance of the railroad, but also serves as storage for the Railyard’s new water harvesting system.

Spreading out from the south side of the commercial center, Railyard Park occupies the once forlorn corner at Guadalupe and Cerrillos Roads. Newly landscaped with more than 300 trees and thousands of native and drought-tolerant plants, the Park’s main features include a shady ramada with hanging porch swings, a children’s play area, picnic areas, and an outdoor performance space. Walking and biking trails wind throughout the Park and link all areas of the Railyard including the plaza and two pocket parks. One trail follows an important historical feature incorporated into the Park’s design, the four century-old Acequia Madre or “mother ditch” that brought precious water from the Santa Fe River to farms south of town. In the future, a demonstration garden will adjoin the Acequia and in years of good rain its waters once again will bring life to the landscape.

Of course, the defining historical feature of the Railyard (the railroad itself) plays a vital role in the new development. Bisecting the length of the property, the tracks terminate at a 1909 Mission style Depot at the north end of the complex. Since 1992, the Depot has been headquarters for the Santa Fe Southern Railway which operates tourist excursions and hauls freight over the 18 mile spur to Lamy, NM at the old Santa Fe Railway mainline.

Santa Fe is renowned for the way it recycles its past, and these three projects are no exception. Each honors and celebrates the history of our city while providing new opportunities for residents and visitors, enriching and revitalizing Santa Fe.

You can find more things to do on our Northern New Mexico events page.