Categories Menu
Home » Blog » The Heat is On

The Heat is On 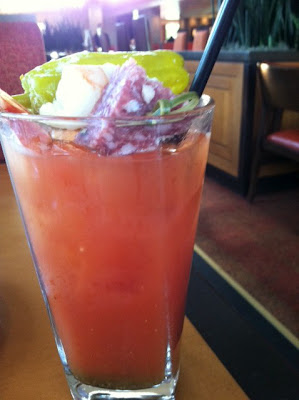 We’re looking at the high 90s for the next week in Santa Fe. At least we’ve got wonderfully cool Rocky Mountain lows in the 60s. I was just in Phoenix, talking about hot. There are very few advantages to 110 in the shade, but I enjoyed one: a great rate of well under $200 at the Arizona Biltmore, that sprawling Frank Lloyd Wright-designed resort. I saw grackles and mockingbirds darting among the colorful lantana, white oleanders, and bright hibiscus. Misters blew out the finest sprinkle of cold water at the porte cochere. The Biltmore Cafe had lattes and almond-flour carrot muffins at breakfast. At the Biltmore bar, the best Bloody Mary I’ve ever had– a spicy concoction with garnishes of olive, salami, pepperoncini, and mozzarella ball on a toothpick.

There’s a definite Santa Fe–Phoenix corridor. Spanish colonial revival architecture in both cities, and Pueblo revival adobes. Even more Mexican restaurants in Phoenix than Santa Fe! Accountants who double as farriers. Lloyd Kiva New got his start in Scottsdale, then moved to Santa Fe. Fritz Scholder went back and forth between the two. Sizable Indian populations in both cities, but probably more in Phoenix. I was there helping out on the editing and proofing of Native Peoples’ (www.nativepeoples.com) July/August issue, its biggest ever and also the official Santa Fe Indian Market Magazine, with in-depth articles on contemporary Native arts! Plenty of art galleries with presences in Santa Fe and Phoenix, including Blue Rain, Riva Yares, King, Chiaroscuro, River Trading Post, and Altermann (plus Mark Sublette Medicine Man in Tucson).

Arriving back in Albuquerque at night, I had a tricky drive up I-25, what with all the construction and exit closures. Santa Fe keeps growing! Newest art gallery in town is Wade Wilson Art opening June 29, including works by contemporary artists like ranching photographer Barbara Van Cleve.