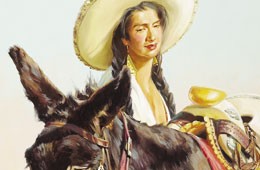 Learn about Terri Moyers, the 2004 Tucson Museum of Art Artist of the Year It is sometimes amazing that lives that begin so differently can end up on the same path. Not only did the lives of Terri Kelly Moyers and John Moyers begin a country apart, but they also grew up in two different worlds.

Terri Kelly Moyers was not born into a family that could adequately nurture and foster her artistic growth and she was predominantly self-taught. As a young girl in Calgary, Terri sharpened her artistic skills with practice. Without direction from a teacher, she was left to be her own critic, and her pictures of animals were often drawn numerous times, if they did not meet her standards.

The artistic ability of Terri continued to grow, as she was accepted to the Alberta College of Art. Her skills blossomed when she was able to attend the artist workshop at Okanagan Game Farm in B.C. She attended for the first time in 1978 and received mentoring from artists such as Robert Lougheed and Clarence Tillenius, who helped her to develop as an artist.

When she returned to Okanagan Game Farm in 1979, she developed more than her artistic ability, as she began a new relationship with John Moyers. The two eventually married, and the kids from worlds apart began a life together as artists and companions. John and Terri currently share a home and studio in Santa Fe and have one son.

Terri Moyers art is highly regarded, and she has been featured in the Prix de West show at the National Cowboy & Western Heritage Museum in Oklahoma City. She was named the 2004 Artist of the Year by the Tucson Museum of Art.