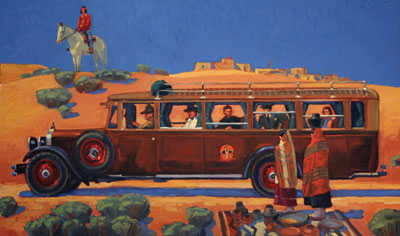 There was a brief time in history when tourists in the Southwest had several exciting travel choices. They could glide through the desert landscape on the Santa Fe Railway’s Super Chief, dining at linen-covered tables, and disembarking at Fred Harvey’s immaculate hotels.

The venturesome might decide on an auto trip along route 66, stopping off at trading posts and curio stores, eating in a roadside stand shaped like a giant hot dog, and sleeping in motel rooms shaped like teepees.

The well-heeled could opt to view the landscape from above, enjoying air travel when it was still an elegant luxury.

Such images from the golden age of travel are the subject of an exhibition of new paintings by Dennis Ziemienski and Francis Livingston opening at Mark Sublette Medicine Man Gallery, Santa Fe on June 21, 2007. Both artists are well known for their historical and contemporary genre painting and both are fascinated with the look and feel of western travel in the period from the 1920s through the 1950s.

Most historical genre painting in the west focuses on nineteenth century cowboys and pre-reservation Indians, but Livingston and Ziemienski delight in exploring the rich imagery of the early and mid-twentieth century. “For this particular exhibition Francis and I wanted to showcase a period in time that is often neglected pictorially,” said Ziemienski.

From illustration to fine art

As much as they enjoy the imagery, however, Ziemienski and Livingston’s interest in the period runs much deeper than its subject matter. Fine art, graphic design, and industrial design of the era have been important influences in all of their work.

Both artists had first careers as illustrators and both found special inspiration in the path-breaking designs of early twentieth century poster artists such as Tom Purvis, Ludwig Hohlwein, and Leslie Ragan. Though the inspiration is shared, each artist has taken away his own personal lessons. Ziemienski is drawn to the powerful combination of composition and color pioneered by the early graphic designers.

“A strong and exotically bold sense of composition was the hallmark of all these artists. For their time, I think it was something new and innovative and it is something I like exploring.”

A perfect example is Ziemienski’s Desert Plunge. The composition is an inverted “T,” comprising cactus and umbrellas, crossed by the “swoosh” of the diver.

The contrast of the static, dark green “T” with the brightly rendered diver, suspended at the most elegant point of her dive, gives the painting its tremendous dynamism. “As an illustrator,” says the artist, “I constructed highly contrasted imagery with bold compositions. Fortunately, this style landed many important poster assignments. The mission of a poster is to draw you into the subject. My hope is that my gallery paintings will always have that effect on the viewer.” Livingston’s color and composition are quieter, but still reveal strong geometry and careful structure.  Indeed, it is the ethic of careful design and craftsmanship that he most admires in art and design of the period.

“Art, architecture and objects of that period were so well thought out,” says Livingston. “They used beautiful color combinations that played off strong compositions. They paid attention to the texture and appearance of materials and how that affected other elements of design. Everything worked together to create a sense of unity and balance. The best work had a sense of rightness-almost as if the design was inevitable.” Livingston’s River Below shows how he composes with abstract shapes, but then both softens and deepens the geometry through layering and through closely modulated and subdued color. The aspen trees combine with the bands of water, sky, and shrubbery to create a three-dimensional grid.

This structure provides the perfect foil for the seemingly incongruous train which is both part of the grid and emerging from it.  The result is a delicate balance between stillness and movement. “My compositions are asymmetrical and designed to lead the eye through the painting. But at the same time, I strive for a sense of repose that ultimately is comfortable to the eye.” The call of the open road

Ziemienski and Livingston find inspiration in all fields of design from the 1920s to the 1950s, but it is clear that transportation design is one of their favorites.

Trains, autos, airplanes and boats of the period exemplify the complex craftsmanship and bold design the artists find so stimulating.  But these icons of power and speed also exemplify the technological optimism of the age. Ziemienski’s

Daylight at El Palo Alto captures the smooth swiftness of the Southern Pacific Railroad’s luxury train, the Daylight Limited, and turns it into a metaphor of the eras celebration of technological and aesthetic “progress.”

As the artist puts it, industrial design of the time revealed “a naive grandeur in a growing age of technology; an innate understanding of elegance, even in a time of depression.” Capturing this sense of technological sophistication is critical to the show because the artist’s real intention is to explore the many changes that technological “progress” brought to the west in the period.

Tourism is a perfect way to explore these changes because it brought modern, urban people face to face with more isolated and traditional ways of life. Livingston’s The Trading Post contrasts the Indian craftsman’s saddled mount with the tourist’s Model A Ford.

The two have come together at the Pueblo Revival style trading post, owned by someone with one foot in each world. Ziemienski’s Tahoe Boat simply and effectively pits the sleek speed of the polished boat against the mottled paint horse and traditional dress of the cowboy.

The spirit of the age in the west lay in these stark contrasts. “The concept of old and new side by side is one driving force for this group of paintings,” says Livingston. “The idea that someone on horseback, only knowing that mode of travel, could look in the sky and see a bright, metallic airplane against the clouds seems difficult to imagine. For this brief moment in history, the ancient and the modern overlapped in startling ways. We’ll never see it quite that way again.”

Livingston and Ziemienski revel in the contrasts and ironies of that time when tourists pushed into the formerly remote regions of the west. Yet, they explore the era’s complexities with sensitivity, absent of guile or cynicism.

They are genuinely curious, intrigued, even bemused, by the history of western tourism. Their paintings can take the point of view of either the visitor or the visited; those who brought change or those whose lives were forever altered.

As lifelong residents of the west, both artists strive to understand the changing landscape around them by integrating history and period aesthetics in their work.

Nostalgia for the viewer

Even when sensitive to historical context, art is an essentially interpretive exercise. Ziemienski and Livingston see themselves as story tellers rather than documentarians.

“I’m looking for a connection between the images and the viewer, says Ziemienski. “Whether the viewer recalls the place in time or merely imagines it through old photos or movies, it should be a painting that compels the viewer to want to be there.”

Dennis Ziemienski, Arrived from the Canyon, oil on canvas, 36″ x 48″

Livingston adds: “It’s like historical fiction or a movie that is set in the past. I want to explore and convey what it would feel like to be in that time and place.”  Noting that his work has elements of nostalgia: “Sometimes I will even paint what you might want the past to feel like. It’s historically accurate fiction.  Maybe that scene never existed exactly as I’ve painted it, but it certainly could have looked that way.”

Livingston and Ziemienski’s work for this show is somewhat different from the subjects each has covered in the past.

Says Ziemienski, “I’m sure that once this show is complete we’ll move on to new ideas. I, for one, will always be fond of painting scenes of the past, but it won’t occupy my full attention as it has the last few months.” Nevertheless, this show also can be seen as a natural extension of each artist’s body of work.

Both are dedicated to discovering the essence of familiar things and places; to look at ordinary situations in new ways, whether they be in the past or present. Livingston sums it up: “In all of my work I just strive to find the possible beauty in everyday contexts.” Dennis Ziemienski, The The Flying Buckaroo, oil on linen, 42″ x 48″

Dennis Ziemienski and Francis Livingston rank among the top American illustrators and their work has been widely published.

Both artists now devote most of their time to gallery painting. Their landscape and genre scenes are shown and collected around the country.

Francis Livingston studied at the Rocky Mountain School of Art in Denver and the Academy of Art in San Francisco. Dennis Ziemienski is a graduate of the California College of Arts and Crafts.

He is internationally known for his illustrations for the Time-Life Co., Rolling Stone and The New York Times. Book commissions include Armistead Maupin’s Tales of the City and Elmore Leonard’s Freaky Deaky. Poster commissions include Super Bowl XXIX and the 2006 Kentucky Derby.