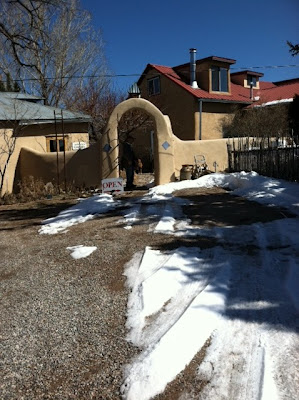 Cardona-Hine Gallery in Truchas this past weekend

I was in Truchas this past weekend, researching the surge in art galleries in that isolated mountain hamlet north of Santa Fe. With a population of just a few hundred people, it’s impressive. I met two artists who had done work for the Smithsonian, somebody who creates the loveliest steel bells out of castoff oil-field pipe and expired pressure vessels, and a Swedish painter who moved in behind the church years ago because she had nowhere else to live with her wolf.

The Swedish painter is Anna Karin, now running Anna Karin Gallery in an old adobe house. She had been creating murals in Colorado when she first arrived. She remembers, “I didn’t want to be on scaffolds anymore. I had a wolf that I couldn’t take back to Sweden. I moved in behind the church. I hung up an ‘open’ sign, and the first day I sold three paintings – one to a guy on a bicycle who only had a camper to live it. It just seemed like a sign! So I stayed.”

Almost everyone in Truchas lives in an old adobe house, and almost everyone is capable on their own. Say, when a skunk sneaks into one of those old adobes—and I sniffed a skunk just outside town—there’s no calling Orkin pest control for same-day service. Jeane George Weigel, who writes a terrific blog about being an artist in Truchas, posted about my visit and told me, “Those of us that settle here are a quirky group.” I could see that. Most of the rustic live-work studio galleries that I visited were heated only by woodstoves. It gets really cold in Truchas — like single digits and minus temps at night. The steep road leading up to town would be treacherous when iced over. And yet Truchas is a very special place, attracting some of the most creative minds in New Mexico. You’ll be able to read about what I found in my story to be published in May in The Santa Fe New Mexican, in the Bienvenidos special section.