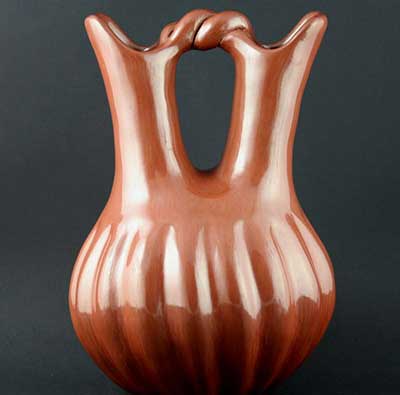 Learn about the exquisite pottery of this Northern New Mexico pueblo 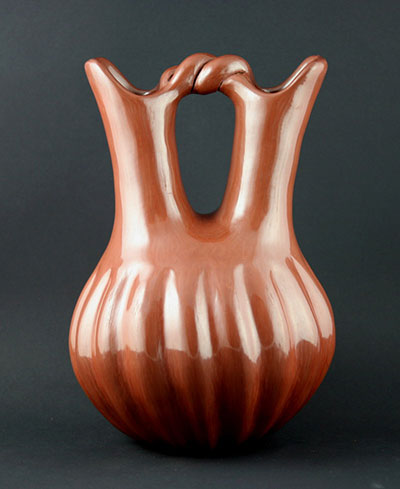 Later, they built adobe structures on the slopes and top of the mesa, surrounded by spectacular views of the valley. They were successful hunters and farmers.

But around 600 years ago, a severe drought forced the people to move into the valley near the Rio Grande. Kha’ p’o, the native Tewa word meaning “Valley of the Wild Roses,” has been home to the Santa Clara people ever since.

Today, tribal members live in modern homes on their 50,000-acre reservation. They have a distinct and thriving culture with a sovereign government, and they carefully maintain the traditions and life ways passed on from generation to generation.

Santa Clara is known for its artists. Their polished black and red pottery is world famous. Clay dug from the earth is first molded into coils to form a pot. The shape is entirely formed and refined by hand. It is then decorated with symbols of the Native people’s reverence and identification with nature, including clouds, animals, mountains, and all creation.

Often, these designs are carved into the clay. They may be very simple (like a bear claw impression) or an incredibly complex weaving of many patterns. Then the pot is polished with a special smooth stone, which has often been passed down from a parent or grandparent.

Finally, the pot is fired on an open outdoor wood fire. The unique luster of the finished product is hard to believe. Many shops in the village are open to visitors, selling that kind of pottery, and beadwork, embroidery, sculpture, and paintings — all done by local artists.

Santa Clara realizes that maintaining traditions and culture goes hand in hand with providing dignity and opportunity for their youth. With this in mind, the Pueblo strives to develop economically in ways that will not harm their traditional way of life.

Many new jobs were created with the opening of the Big Rock Casino and Bowling Alley, and the spectacular Black Mesa Golf Course. These recreational revenues improve the quality of life for local people, and make it possible for more of the Pueblo’s young people to remain on their ancestral homelands.

The Santa Clara Pueblo carefully preserves their past and confidently moves forward into the future.

The Santa Clara Pueblo is located on the west bank of the Rio Grande between Santa Fe and Taos in northern New Mexico’s Rio Arriba County.

The Santa Clara Tribe’s nearly 50,000-acre reservation epitomizes the beauty and majesty of New Mexico’s diverse landscape. The ancient dwellings located in the Puye Cliffs were carved into the jagged volcanic tufa; rocks formed from compressed volcanic ash and cinders, and were eventually expanded to include adobe structures along the slopes and on top of the numerous mesas.

The majority of the tribal lands included in the main village comprise a unique social, cultural, and residential area. Much of the City of Española lies within the exterior boundaries of the reservation and within the visual corridor of the spectacular National Historic Landmark Puye Cliff Dwellings, the best-known landmark in the Santa Clara Pueblo.