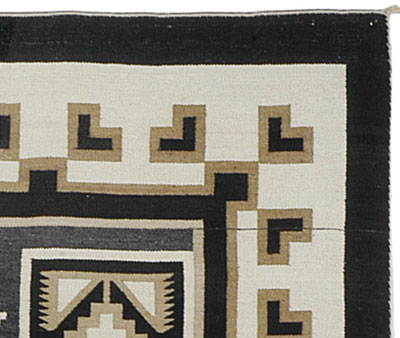 Symbols and motifs in Navajo weaving

The gift of Spider Woman: Symbols and motifs in Navajo weavings For the traditional Navajo family, the Holy People who created the Navajo were very powerful deities.

They traveled on the “sun’s rays” and descended into the world on “lightning bolts.” It was Changing Woman who taught the Navajo how to live in “harmony,” but it was Spider Woman who gave them secrets to find their way in this world.

To the traditional Navajo weaver, Spider Woman provided the framework to live and weave beautiful things – the essence of being Navajo.

Women are the weavers in traditional Navajo society. Although this cultural value is fading somewhat today with a few young men taking up the challenge, women still dominate the area of weaving.

The designs in Navajo weavings have always been a personal expression of the weaver. However, we can make some educated guesses based upon historical research and interviews with Navajo elders.

Representing the teachings of Spider Woman

Prior to 1900, old Navajo wearing blankets often carried symbols or motifs that were attached to the teachings of Spider Woman.

Perhaps the symbol or motif that dominated those early blankets was the cross.

Many a Navajo grandmother will tell you that crosses represent Spider Woman. The symbol of Spider Woman was given to the earliest weavers to remember her teachings and wisdom.

For some weavers, placing the symbol of Spider Woman (crosses) within a graphic form of a diamond, triangle or square was risky business. Spider Woman was not of this world and her spirit should not be entrapped within the form.

Therefore in some Navajo weavings, the cross will have an actual hole or sometimes a graphic hole in the cross. Perhaps two of the earliest design elements to be utilized by Navajo weavers are the diamond and the triangle. These elements were incorporated into old wearing blankets and continue in the modern day Navajo rugs.

Again, we cannot be too sure of some of the meanings, but many Navajo grandmothers will tell you that the diamond is a symbol of the Dinétah or Navajo homeland with its four sacred corners that are marked by the four sacred mountains.

Triangles are basic building blocks of Navajo design. Placed on top of each other, triangles can become a series of prayer feathers or songs or become the backbone of a mountain Yei figure. About the “Spirit line”

After the year 1900, the “spirit line” became a popular element for many traditional Navajo weavers.

This occurred because traders requested weavers to place borders around their weavings. By this time, most weavers were selling their weavings through the trading post system.

The traditional weaver became very concerned about trapping their creative spirit within the weaving and not being able to weave in the future.

The “spirit line” is a small strand of yarn of contrasting color that flows from the inner design element of the weaving to the outer edge. The custom continues today in many contemporary Navajo rugs. A design element that appeared in Navajo weaving from the late 19th century and continued until the late 1930s is the Navajo “whirling logs.”

This design is recognized by Anglos as a swastika and caused great controversy in the late 1930s. The Navajo people chose not to include it in future weavings after this period.

This symbol comes from the Navajo origin myth and was incorporated into weavings as a good luck symbol for gifts or for sale at trading posts. Lightning was the most powerful symbol in the world of the Navajo.

Not only was lightning powerful in the real world, it also carried great strength in Navajo weavings. In Navajo mythology, lightning was used to make weaving tools but it could also help to define the power of an individual blanket or rug.

Small “zigzags” in the four corners of a weaving could lend energy to the overall design. There exists no more powerful symbol in the Eyedazzler or Germantown period of Navajo weaving than the lightning bolts that streak across the face of the weaving and grab the eyes of the beholder. Other inspirations from Navajo life

The many canyons where Navajos lived contain ancient Anasazi ruins and historic Navajo pictographs. Beautiful pottery shards could always be found at the feet of most Navajo weavers.

Such motifs would appear in the borders or central design element of Navajo weavings. The use of color

The variety of colors was limited in the early days to browns, blacks, whites, grays and a little indigo blue. Occasionally, red was used but was obtained with great difficulty.

These colors gave enormous energy to the early Navajo Chiefs Blankets. Later years saw the introduction of synthetic and vegetable dyes, and Germantown yarns that gave the Navjao weaver a whole new palette of creative colors. One cannot separate Navajo weavings from the culture in which they were created.

As outside influences began to penetrate the world of the traditional Navajo weaver, patterns, symbols and colors have constantly evolved and changed.

Over the three-hundred-year history of weaving, Spider Woman remains a constant reminder of traditional Navjao wisdom and her many gifts to the Navajo people. Medicine Man Gallery offers one of the best places to see the great weavings of traditional weavers.

The gallery has available the finest Navajo weavings from 1860 to 1960. We encourage you to visit the gallery and experience the gift of Spider Woman.