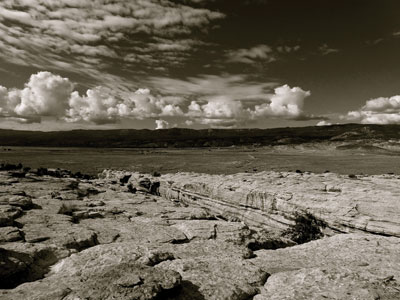 Santa Fe’s current novelists range from the guy who created Rambo to a best-selling history writer to a handful of mystery writers, including a former cop, an established women’s author, and an art-gallery owner launching a series that roams Navajoland. There’s also a former CIA operative writing in town, as well as the mastermind behind the Game of Thrones fantasy series.

There’s been a writers’ colony in Santa Fe as long as there’s been an artists’ colony: since the early 1900s, and for pretty much the same reasons.

Creative-minded individuals come to Santa Fe to be individualists away from an over-culture dominated by commercialism and conformity.

Intellectuals like D.H. Lawrence, Willa Cather, Mary Austin, Alice Corbin Henderson, Witter Bynner and Peggy Pond Church were some of the earliest writers to find inspiration here in the foothills of the Rocky Mountains where nature and spirituality seem intertwined.

Which is what Cather expresses in her 1927 classic Death Comes for the Archbishop, describing how, “As the wagons went forward and the sun sank lower, a sweep of red carnelian-colored hills lying at the foot of the mountains came into view; they curved like two arms about a depression in the plain; and in that depression was Santa Fe, at last! A thin, wavering adobe town… a green Plaza… at one end, a church with two earthen towers.”

You won’t find such formal poetic prose in David Morrell’s two-dozen action-thrillers, which include such high-profile titles as First Blood (yes, the novel that introduced Rambo), The Brotherhood of the Rose (adapted into a miniseries), and The League of Night and Fog.

Morrell explains, “I try to find new, creative ways to write thrillers and use the vast popularity of the genre to communicate themes that readers might otherwise not encounter.”

Born in Ontario, Canada, in 1943, he attended Pennsylvania State University earning a PhD in American literature, taught in the English department at the University of Iowa, then moved to Santa Fe.

With an astounding 18 million copies of his novels in print, Morrell’s work has been translated into 26 languages. “On a practical level, I can write pretty much anywhere, but there’s something about Santa Fe’s vast, mystical landscape and the way the light keeps changing that encourages my imagination. Indeed I’ve written four books that feature the area,” notes Morrell. “For writers, I think Santa Fe is a self-selecting community. It’s a great place to hide out, hunker down, and get our pages written. If we want a break, all we need to do is look at the magnificent horizon.”

Not that he shies away from grittier visages.

Consider his comments about the fourth Rambo movie: “It’s spot-on in terms of how I imagined the character – angry, burned-out, and filled with self-disgust because Rambo hates what he is and yet knows it’s the only thing he does well.”

Machine guns, cobras in the jungle – Morrell has been there, done that: he is a graduate of the National Outdoor Leadership School for wilderness survival as well as the G. Gordon Liddy Academy of Corporate Security, and has been trained in firearms, hostage negotiation, assuming identities, and executive protection.

The chart-topping history writer is Hampton Sides, born in 1962 in Memphis, Tennessee.

He moved to Santa Fe as a writer for Outside magazine before penning such historical hits as Ghost Soldiers, about the rescue of the Bataan Death March survivors (it sold over one million copies worldwide); Blood and Thunder, about frontiersman Kit Carson (it was named one of the 10 Best Books of 2006 by Time magazine); and Hellhound on His Trail, about the assassination of Martin Luther King Jr. (it reached number six on The New York Times bestseller list and has reportedly been optioned by Universal Studios).

The former cop writing mystery novels is Michael McGarrity, who was a deputy sheriff for Santa Fe County before launching his character-driven, atmospheric series about fictional Santa Fe police chief Kevin Kerney; it has also soared onto The New York Times bestseller list.

McGarrity says, “Santa Fe feeds your soul and your intellect. It has a positive influence on who I am as a writer and has for the nearly 40 years I’ve been here. Santa Fe is an important part of my life and it plays into the creative element of what I do.”

After taking his protagonist Kerney through 12 novels, including such standouts as The Big Gamble, in which he teams up with a younger Indian cop, McGarrity is now undertaking a trio of prequels about Kerney’s family heritage.

The first, a historic Western called Hard Country, came out in May to acclaim as an official selection of the Book of the Month Club, Doubleday Book Club, and Literary Guild Book Club. “There is a need to be told good stories,” McGarrity believes. “It’s an innate part of the human condition. There has to be some universality among us. Otherwise we’re just savages. We’ve got to be able to pinpoint a connection here or there where we can say, yeah that’s universal. Envy is universal. Love is universal. Evil is universal. Conflict is universal.” Accomplished women’s fiction writer Jo-Ann Mapson, whose novel Blue Rodeo was made into a TV movie, relocated from California and Alaska to Santa Fe a few years ago. She observes, “Santa Fe isn’t just a place, it’s a PLACE. I rely heavily on the landscape to make my novels real, from wildflowers to petroglyphs to dirt roads to cloud-scudded sky and more. There’s an embarrassment of riches to use here: ghosts, history, violence, culture, art, environment, architecture…”

Mapson’s most recent novel, the earthy, emotional Solomon’s Oak, dips into the mystery genre while deconstructing the secrets of three broken souls who slowly come together on a California ranch – a place where a girl goes missing while taking her dog for a walk, a husband dies unexpectedly, and an ex-cop adept at taking crime photos is persuaded to photograph a wedding by a desperate caterer, who convinces him, “How hard can it be? Just try not to make anyone look dead. I’ll pay you whatever you think is fair. My future is riding on this wedding.”

In Mapson’s next book, Finding Casey – due from Bloomsbury in October – the same characters “move to Santa Fe to make a fresh start, but find the past has followed them here,” says Mapson.

Douglas Preston, who lives in Santa Fe and Maine, and sometimes collaborates with Lincoln Child, has written such popular suspense thrillers as Relic (made into a motion picture), Riptide, and Thunderhead, as well as the non-fiction crime book The Monster of Florence, reportedly in development as a film.

George R.R. Martin, author of the thriving Game of Thrones fantasy books, which are now an HBO cable series that he is involved in executive producing, is another Santa Fe writer. So is ex-CIA operative Valerie Plame Wilson, now writing international spy thrillers with Sarah Lovett. This summer, Sublette launches Paint By Numbers, the first in a series of art murder-mysteries following Santa Fe gallery owner Charles Bloom on business that frequently takes him to Navajoland.

Sublette seriously started writing fiction five years ago, and has five books in the works in the Bloom murder-mystery series. He acknowledges, “Without Santa Fe, I wouldn’t have a Bloom series. The City Different is the muse for my books. The smells, culture, and art are paramount to my settings. Art dealer Charles Bloom has a gallery on the 600 block of Canyon Road. Having had a Canyon Road art gallery for 16 years myself, and being a native New Mexican, allows me to tell a story which is not only believable but feels like home.”

A medical doctor who finished his residency at the University of Arizona, Sublette is known for his Medicine Man Gallery locations in Santa Fe and Tucson, which represent works by Western artist Maynard Dixon, the Taos Society of Artists, and contemporary Southwest artists, so he clearly knows the art scene.

He plans to have Paint by Numbers out by August 1, just in time for Indian Market, commenting, “One of the pivotal chapters in the book is set during Indian Market weekend. It seems appropriate to hold a book signing then, which I will.

Anyone who’s experienced the madness of Market weekend will appreciate how Charles Bloom feels, expecting the best sales weekend in Santa Fe, then dealing with how events go terribly wrong.” Any more clues about what’s coming? Sublette offers, “I enjoy developing plot lines that encourage the reader to take notice of setting, time, and place to help solve the mystery.

I feel interconnecting storylines are one of my strong suits – that and a great ending.”

Santa Fe-based Wolf Schneider has been editor in chief of the Santa Fean, editor of Living West, and consulting editor of Southwest Art, and blogs at www.wolfschneiderusa.com.