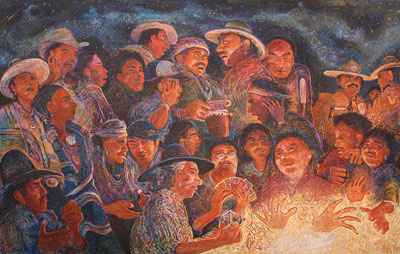 New Mexico’s tribally-owned casinos have become such familiar landmarks on the tourism landscape, it’s hard to believe they’ve been here only a dozen years.

In 1987, the Federal Government confirmed the right of Tribal governments to operate casinos on their own lands. The State of New Mexico did not allow Indian gaming until 1995, but thirteen Pueblos and Tribes more than made up for lost time by building a total of nineteen casinos, with at least one more one the way.

New Mexico’s casinos cater to a diverse audience of both residents and tourists. They range from intimate slot machine venues such as Pojoaque Pueblo’s Cities of Gold Sports Bar to the magnificent, luxury resort hotels at Sandia, Santa Ana, and Isleta Pueblos. Winning the right to operate casinos has become a source of pride for our State’s Native nations. As one of the first instances where the Pueblos and Tribes were able to negotiate with the State as equals, casino enterprises are seen as an essential component of Native sovereignty and self-determination. Unlike Tribal casinos in many other states, New Mexico’s casinos are managed by the tribes themselves, keeping casino operations aligned with Tribal culture and social values.

Of course, Tribal gaming also has very tangible benefits. America’s Indian Reservations still suffer with some of the highest rates of poverty and unemployment and the shortest life-expectancy in the nation. Increasingly, these social issues are being addressed with gaming revenues.  By state law, the Pueblos’ and Tribes’ share of casino profits are to be used to fund community services, economic development projects, and Pueblo/Tribal government operations. For example, Ohkay Owingeh (formerly San Juan Pueblo) used casino revenues to capitalize its tribal construction company, Tse Construction Services, providing jobs for Pueblo residents as well as non-Indians around the state. Pojoaque and Acoma Pueblos have built museums and cultural centers for use of their members as well as to attract tourism. All of the gaming Pueblos/Tribes have used casino proceeds to fund much needed housing, health care, and education services. Sandia Pueblo, which operates the State’s largest casino, is now able to send its members to any school, anywhere, free of cost.

The entire state of New Mexico also directly benefits from Tribal gaming. In 2006, the thirteen gaming Pueblos and Tribes contributed more than 51 million dollars in casino revenues to the New Mexico State Treasury. From two-thirds to three-quarters of casino employees are non-native New Mexicans, spreading payrolls far beyond reservation boundaries and enhancing tax revenues for the State.

In just over a decade, Tribal gaming has grown into one of the State’s largest industries, bringing in tourism dollars, contributing to New Mexico’s growth, and raising the standard of living for our State’s Native American communities.