Here in Santa Fe, birds are chirping, cottonwoods and elms are leafing out, wildflowers are blooming, and it’s light until almost 9 PM. Everybody seems to have a Santa Fe connection, come summer. Did you see jockey Mike Smith win the Belmont Stakes on Palace Malice this weekend? Smith is related to gallery owner Nedra Matteucci, whose lush, green sculpture garden is looking like an elegant little Central Park right around now. 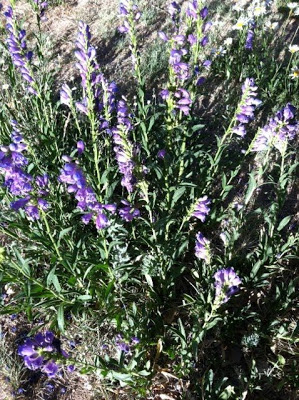 A patch of wildflowers in Santa Fe today

Patio dining is in full swing at Charles Dale’s Bouche French bistro, where gourmands are flocking. At just 6pm all tables were taken during my most recent visit. This week, Panera debuts its new Santa Fe location, while last week Bobcat Bite shut down on Old Las Vegas Highway but is soon to re-open downtown at Garrett’s Desert Inn. Santa Fe’s hottest months are June and July, and heck, this week is looking like a scorcher with temperatures soaring into the 90s for the next few days. We’re hoping we’ll get lucky with some rain to help contain the fires in the Pecos Wilderness and Jemez Mountains.

Travelers are flocking into town now, either on daily flights into Santa Fe from Los Angeles, Dallas, and Denver, or the new JetBlue service from New York to Albuquerque. Among the swanky hotel deals is one at the Fairmont Heritage Place El Corazon de Santa Fe, with its viga fireplaces, clay plaster walls, and luxurious monthly stays at fairly reasonable rates, according to a friend who’s booked herself in for the summer. She was lucky to find it, and I’ve been lucky to be working hard on a movie these last few months. “Successful people recognize their luck,” Downton Abbey creator Julian Fellowes just commented in AwardsLine. “Anyone who is perceived as very successful who says luck played no part in it is lying.” I think he’s right.