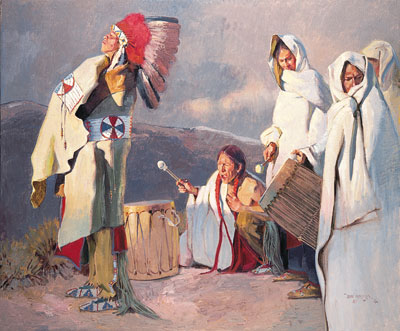 John Moyers, the son of acclaimed Western artist William Moyers (a member and three-time president of the Cowboy Artistsof America), was bred to be a Western artist. And although John Moyers was born in Atlanta, GA, he spent most of his youth in New Mexico.

John Moyers followed closely in the footsteps of his father beginning his career as an illustrator and working as an animator at the Walt Disney Studios in California.

The indoor studio work, however, was not what Moyers was driven to do, and in 1979, he accepted an invitation from Cowboy Artist Robert Lougheed to attend an artist workshop at a game preserve in British Columbia.

At the workshop, Moyers honed his plein air painting skills, and met his future wife, Canadian native and fellow workshop attendee, Terri Kelly Moyers. The two have been married for over twenty years, and have one son.

Accuracy may be the best way to describe the art of John Moyers. He captures the essential qualities of a scene by precisely representing colors and values. Moyers goes one-step further by using authentic props making his pieces historically correct.

The ability of Moyers to capture these scenes has led to a successful career, which has been highlighted by his induction into the Cowboy Artists of America. Moyers has been awarded both silver and gold medals from the CAA, and his work has also been featured at the Gilcrease Museum in Tulsa, OK and at the Prix de West at the National Cowboy & Western Heritage Museum in Oklahoma City.