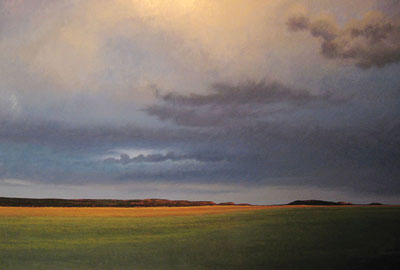 The artist evokes the vast power of nature with his work

Nineteenth century explorers often compared the act of crossing the Great Plains to crossing the ocean. The vast “sea of grass” flooding the center of the continent was featureless, disorienting, hostile; a dangerous void that must be traversed and endured on the way to more hospitable landscapes and climates. Modern travelers may no longer feel threatened by seemingly endless stretches of prairie, now viewed from the sealed window of an auto or airplane. Yet many people still find crossing the great flatness of the plains to be an eventless “non-experience.”

For painter, Jeff Aeling this attitude not only misses the grandeur of the heartland, it literally misses most of what there is to see on the wide open plains, “the sky.”

With a low, flat horizon, Aeling’s paintings are about 20% land and 80% sky. Light, shadow, clouds, rain, and wind are his subjects, and he knows his subjects thoroughly. Aeling has studied western skies for years, mostly through direct observation and countless photographs.

He understands how thunderstorms build, how clouds layer in the atmosphere,  and how their volume and density alternately reflect, refract, and absorb sunlight. He knows from watching thousands of sunsets how the intensity of azure bleeds to bands of lavender and pink and orange before yielding to the inkiness of dusk.

Even a professional meteorologist once remarked that Aeling “gets it right.” His paintings are highly realistic, almost photo-real, and yet they are never coldly scientific or merely descriptive. In fact, they posess a deeply affecting vitality that comes not from “interpreting” nature but from revealing, through literal detail, the immense but subtle power.

Aeling’s goal is to evoke “an intimate connection to the natural world.” In this respect, he shares a great deal with nineteenth century artists and explorers who expressed both fear and wonder at the overwhelming forces of nature. His paintings convey the grandeur of nature that dwarfs all human ambition; an awesome power that makes us feel at once vulnerable and alive. But Aeling is both philosopher and naturalist. Like early American landscape painters, he revels in the intimate details of the natural world as a way of truly appreciating the awesome vastness of the whole.

This almost spiritual apprehension of the power and complexity of nature (what nineteenth century painters called “the sublime”) puts Aeling’s work in the tradition of romantic landscape painting. Nevertheless, the accuracy of his drawing and the matter of fact layout of his compositions prevent his paintings from ever becoming sentimental. He seldom chooses to paint the moment when the sunset is most colorful or the thunderstorm most violent. He does not try to impress the viewer with superficial beauty or exaggerated drama.

For Aeling, revealing beauty is not just capturing a moment, but also suggesting the larger natural processes that create the momentary image and then cause it to fade forever in time. We can feel the movement of light and air just when the storm is about to break over  the viewer. We anticipate the warming power of the sun as it is about to emerge from the mist. We sense the inexorable rotation of the earth as sunset begins to paint the clouds, and the first stars appear.

“I want to capture transitory light,” says Aeling. He is a master at capturing the light, but also at capturing the nuances of changing conditions. His ability to imply the subtle dynamics of nature gives his paintings a quiet dynamism.

Much of the energy in Aeling’s work results from his skillful balance of opposites, a direct and necessary part of revealing the workings of nature. His clouds have undeniable mass and volume, yet they are actively dissolving around the edges.

They cast shadows on the earth while illuminating the heavens. The dome of the sky is a stage for constant action, while the flat ground lies still and silent. This tension of opposites gives life to Aeling’s paintings, not only by highlighting the action inherent in the scene, but also by leading the eye from earth to sky, from detail to detail, actively assembling an understanding of the natural event unfolding before us.

Aeling is so deeply focused on the dynamics of the natural world that he rarely places people, buildings, or any other evidence of human presence in his paintings. In his plains work, the foreground is often dark and devoid of detail. There is no safe and protected place from which to view the movement of skies overhead. Aptly enough, Aeling is also fond of painting seascapes, usually without a shoreline. The relentless rhythm of waves affords no solid ground for the viewer, who is left to the forces of wind and water.

In theory, this strategy seems contrary to his stated purpose of connecting people with nature. Curiously, however, it actually enhances the emotional power of his subjects by eliminating anything that might protect or separate the viewer from land and sky. The viewer is at the mercy of the elements, thrust directly into the midst of nature unfolding. Like those early explorers standing on the unbroken prairie, the viewer gains that sublime feeling of being utterly, gloriously, frighteningly exposed at all heaven and earth.

This is the true genius of Jeff Aeling’s paintings: they do not just allow us to view nature, they enable us to experience it.

A resident of St. Louis, Missouri, Jeff Aeling was trained at the Kansas City Art Institute and the Chicago Art Institute. His paintings can be found in numerous corporate, private, and museum collections around the country. An exhibition of new work by Jeff Aeling will be on view at Medicine Man Gallery in Santa Fe from July 12 through August 10, 2007.